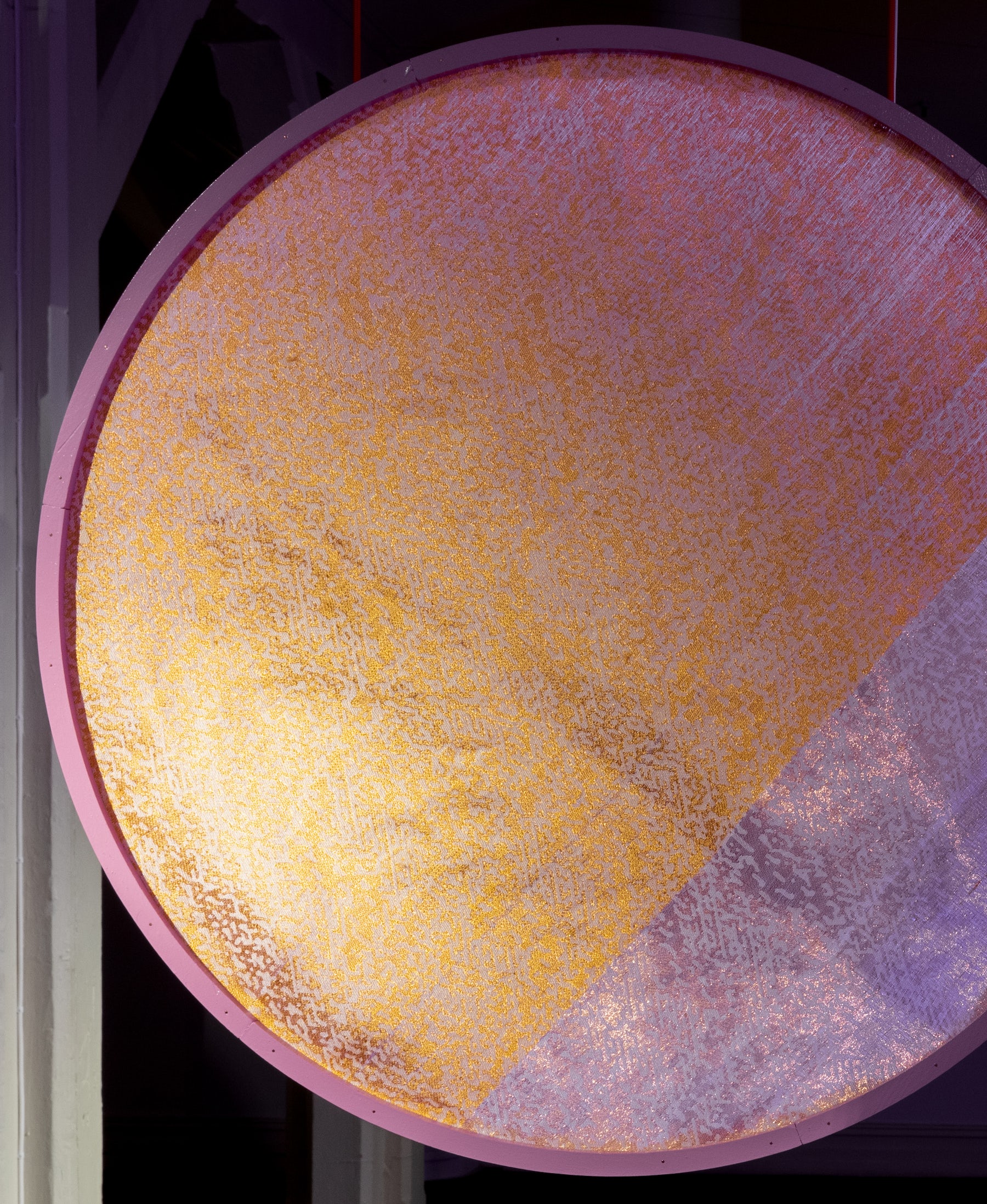 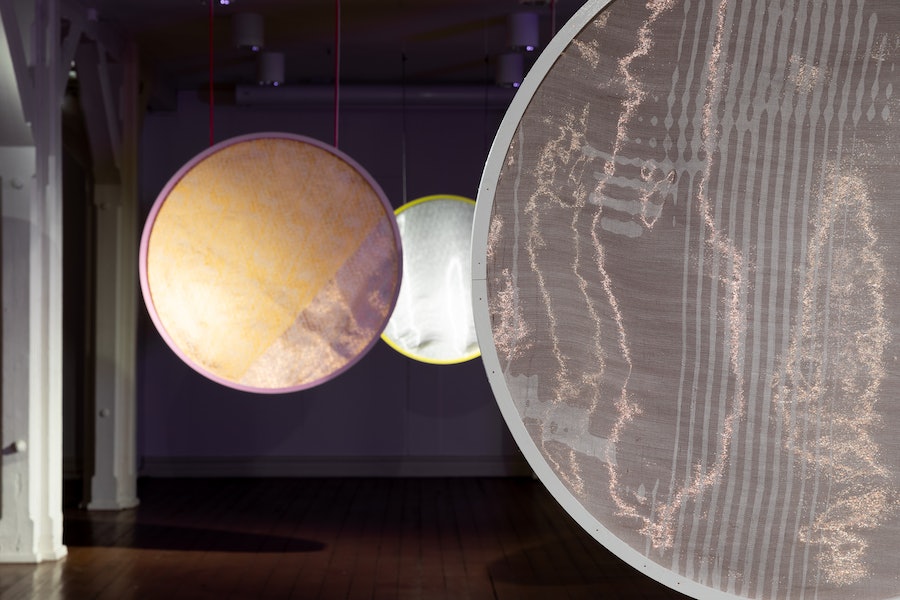 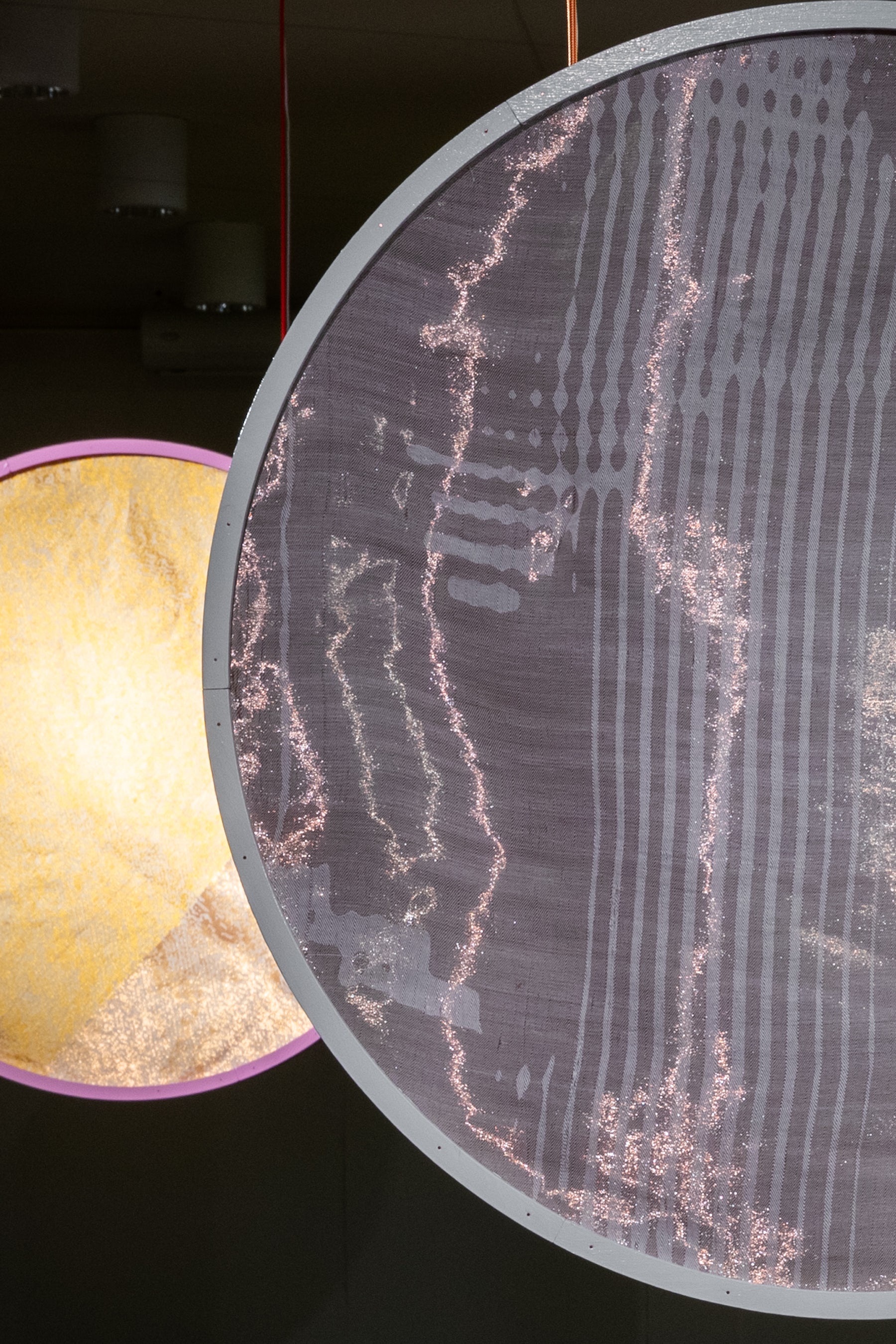 In her exhibition Modes to Moods, Pearla Pigao is showing five textile sculptures woven in copper and metal, mounted in round pastel-colored frames. The sculptures are instruments, functioning according to the principals of the theremin and fill the room with sound that is modulated by the movements of visitors. First as a low hum, then as individual tones. Lights which synchronize with the sound are integrated into the frames, so that the motifs – digital representations of sinus tones – shimmer in delicate pink and bright silver.

In many classical music traditions, including religious music from Middle Ages and the Renaissance, modal scales – collections of scales that are closely related and share the same seven tones – are considered representative of specific states of mind. Modes to Moodsexplores such translations, how sound can be said to be representative of certain moods. In the publication that accompanies the exhibition – the first in a new series from Atelier Nord – Line Ulekleiv writes: «In Pigao’s work the auditory, visual and interactive are treated equally. Each mode of expression overlaps with the others, seemingly insistent that the translation from one expression to the other is never fully consummated.». The publication is made in collaboration with Atelier Kunstnerforbundet and is available in the exhibition.

During the exhibition opening the band Pow Pow (Thomas Aslaksen, Per Magnus Gundersen, Sigurd Thomassen og Andreas Rutlin) will perform alongside Pigao’s sculptures. Pow Pow have been active for over ten years and have released the albums Leaving Las Palmas (2007), Last Days on Earth(2010) and Pow Pow(2014).

Pearla Pigao (b. 1984 Lillesand) graduated from Oslo National Academy of the Arts, Department of Art and Craft during the spring of 2017. She received The Norwegian Association for Arts and Crafts’ student prize, as well as The Craft Prize from The Fund for Art- and Design Students for her diploma piece Sinus. In 2018 she participated in the exhibition Norwegian Presence in Milan and the art fair CHART in Copenhagen. Pigao’s installations are developed in collaboration with electronics developer Henrik Waarum.